Hello, it has been a while.
Some rooms are being done for the new area, don't worry about that. I haven't had anything to write about here.
I have been thinking of the different "teams" the Mimiga will be in. Obviously Shovel Brigade will be the team for mining.
These Mimiga will collect materials for weapon making in the old mines.
Another team is the Troop Brigade, they will have more access to other areas. They will be the ones in training to fight frogs.
If I haven't made it clear, the Mimiga were captured by Soap Kingdom as weapons.
Here is the design of the Troop Brigade.

Maybe I should give them Firearms as well, but I don't have enough space I think.
I haven't had dinner yet (it's early) but I'm eating some Jambon-Beurres right now. They are pretty good.

It is late again.
Map system is almost done now.
Maybe I will not do daily posts.
I ate a mixed burrito today, I think.

Worked on a short cutscene.
The crackers I ate were nice.

It's late again. I had to leave home today so I only had a laptop to work with.
I had to set up all my tools the entire day and didn't do anything.
Have this concept art for the 'Wars' area instead. We need to think of a better name soon. 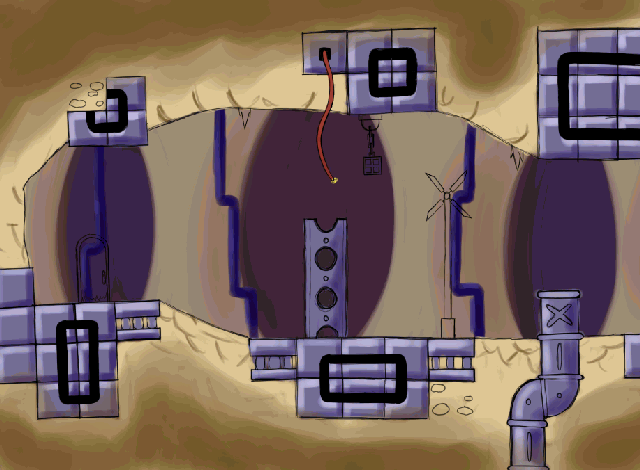 I ate chicken today. It was sort of raw.

I am happy with the enemies right now. I have been working on some cutscenes today.
I had time to make a new room for the 'Wars' area. 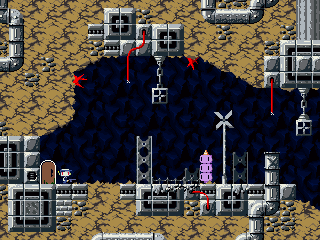 This area is the first original area we will be having. You can see it uses textures from the scrapped "Rockfish" game.
When designing this area and its enemies it was aimed to have to shoot the enemies. The previous area focused on avoiding enemies, as you had no weapon.
I am going to do more balancing now. Maybe add a 5 Cion variation. In the beta, the Cions (Money) enemies dropped went from 1, then 3, then 8.
Pixel also had an idea to have 20 and 50 Cion variations, but he scrapped them.
Cion is really just a mispelling of coin Pixel made, but it is fun to imagine it as a different currency.
Lunch was margherita pizza. I find I much prefer the lighter taste pizzas to traditional pepperoni pizzas these days.

Sorry about yesterday. Some NPC level design is being done as testing.

I always worry about too many enemies on the screen. It can be stressful.
In CAVE STORY Beta the enemies are just put everywhere...
I ate chicken stew yesterday, now I remember. It was nice, specifically when you eat it with dipped bread.

It is very late. I was making ropes. I'm going to talk about it tomorrow.
I don't remember what I ate anymore. I think it was chicken.

Sometimes code bugs can be very startling.
I made a bug today where soaps shoot bubbles and then start riding them like brooms right at you. When it first happened, I screamed because I thought the soap was alive.
I didn't know what could have caused it. It turns out I had a type of "use after free" when soaps would ride other soaps and then jump off. Not as scary once you know.
Recently I played "Kero Blaster" by Studio Pixel. I was inspired by its weapons, so I put the "Fan" weapon from it to the game.
It's a short-range weapon, but it can hit a lot of enemies. I think it will be useful against the stacked soaps.
A friend suggested I try "plazma i mleko" for breakfast. It was a crushed biscuit sprinkled over milk.
It was a different texture than most cereals, and somewhat sweet. I wonder what it might be like with condensed milk.

I dreamt of frogs.
Curry is good.

First prototype of frogs is being developed. I see them as smart but using older arms than soaps use.
Swords to spears are possibilities. The weakest frogs act like light cavalry.
Dinner was fried rice.

Enemy work is still being done.
Save file backwards compatibility for testers was done. Development version is now 0.1.0.0 Alpha.
I ate moussaka today. The potatoes were good.

Not much progress was done today, except for enemies.
I try to design the enemies before I start making the rooms, I make the rooms around the enemies.
The tools we use for editing enemies is making it hard. We usually avoid making enemies because of it.
I tried to make pizza rolls today, but almost burn my house. Thankfully in the end it was all fine. The food was delicious!

In the Beta of CAVE STORY it is assumed that the story is about a Mimiga named Su- building a rocket and escaping.
In NABR the story will follow the same idea, but there is a reason for Su- and other Mimiga to be stuck in the caves.
There is a war happening between two kingdoms, soaps and frogs. Frog kingdom are more powerful, of course, so soap kingdom capture Mimiga that live on the surface of the island.
They use Mimiga as slaves to help during the war. In the Wars area you will see soaps and frogs fight. Mimiga will also be there.

Here is preview of PrtWars. It is very unfinished. This is just the basic concept of it that I need.
For dinner I had corned beef. The cabbage acid definitely complemented it. It would be too heavy on its own.

Today I added a new visual trick of "teleporter previews."
Previously map drawing routines only read from the single global map layer storage and only wrote to the frontbuffer.
Once I changed this I realized that I could load selected map for teleportation and draw a window to it. It makes things feel more alive.
For lunch I ate turkey on a bagel. To improve the flavor I added a small amount of saishikomi-shoyu to the cream cheese -- very successful!

Still working on PrtWars. It looks like a desert level to me, but it isn't. Maybe I could show something tommorow.
Some work on map system is being done. A big fear is that players won't know it exists. Playtesters that were not familiar with the beta didn't know the flower heals.
There was an idea as a joke in the beginning of development to make the start of the game like the Ikachan intro, where it greets the players and explains the game.
Maybe we should revisit that idea, haha. I think most players that download the game will ignore Manual.html.
In the meantime, have this enemy design.

...and while making this GIF I have realized that the walking animation skips a frame.
I had olivier salad for lunch. I liked the potatoes and peas. I would like to eat more olivier salad.

Working on a new area called 'Wars' (For now).
The idea came to me on the walk home from the metro. I saw a pigeon attacking another pigeon and it was very inspiring to me.
Pixel must have been a genius when he drew tilesets. The entire day will probably go into trying to replicate his style.
Today I ate a carne asada torta and it had fresh onions on it and that was pretty nice. The bread was also good.