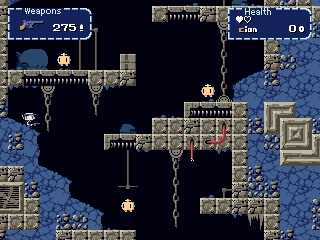 Platform Type of game Release date When you look at the early CAVE STORY you can see interesting ideas.
But you can see why Daisuke Amaya restarted development.

Many gameplay ideas are flawed. Limited bullets would often get you stuck.
Some parts of the Beta of CAVE STORY looked good while others looked worse compared to the final release.
The story is not very good. Daisuke Amaya admits in the development log that it was a lot of different story ideas put together.

CAVE STORY: NABR is not a CAVE STORY beta recreation. We often called it "Beta Remaster" or "Beta Fanfiction" early in development.
There are other people that would like to do a recreation... But is the the beta of CAVE STORY worth playing...?
We don't have anything against preserving history, but scrapping of certain ideas often has good reasons...

CAVE STORY: NABR will expand on the original ideas Daisuke Amaya had in mind, while adding original mechanics.
The structure could be compared to Escape from the Lost Cave - mod one of us was working on that was scrapped.
Idea is the more you explore the more powerful you will get. The idea was not executed very good in Lost Cave, because it was very linear.
NABR takes in mind the original idea of Amaya of making CAVE STORY similar to Metroid. Exploration is a very big focus.

We are very efficient at developing right now. Maybe there will be public alpha soon, but don't expect much. You can follow updates on the blog or in the Chat room for discussion.